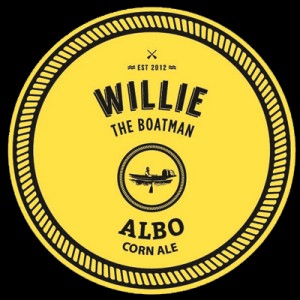 Come in now and Pour Your Own craft beers at TAPS!

So our Albo Corn Ale comes to us from Willie The Boatman and comes with a story that is common amongst brewers. Willie The Boatman was born from a couple of friends being bored of the 9 to 5 humdrum, and a shared love of beer. Nick and Pat not only jumped in the deep end with deciding to open a brewery, but also by taking on the huge task of actual building the damn thing as well! (Sounds a lot like Steve and Geoff who started TAPS)

The boys themselves tell us “The Albo Corn Ale comes from the American Prohibition era. Farmhands would make this light refreshing ale they could enjoy after their long day tending in the fields. The Albo is our tribute to that beer and to the men and women who made and drank the beer back in the day. Our version of this historic beer uses corn and pilsner malt as the base and it is very lightly hopped with Galaxy. The nose is slightly corny…..and on the pallet it is fresh and clean with a great flavor length leaving the drinker wanting more. Named after our Local Federal Member Anthony Albanese. The Albo is best enjoyed with mates old and new.”

Head in to TAPS The Valley and Pour Your Own Albo Ale right now. Pair it up with one of our amazing burgers or if you are up for the challenge, some of our infamous REAPER WINGS.

Have you tried any of the other fine Willie The Boatman beers??

Want To Read The TAPS Times

Keep updated with our latest craft beers, events, specials and much more!